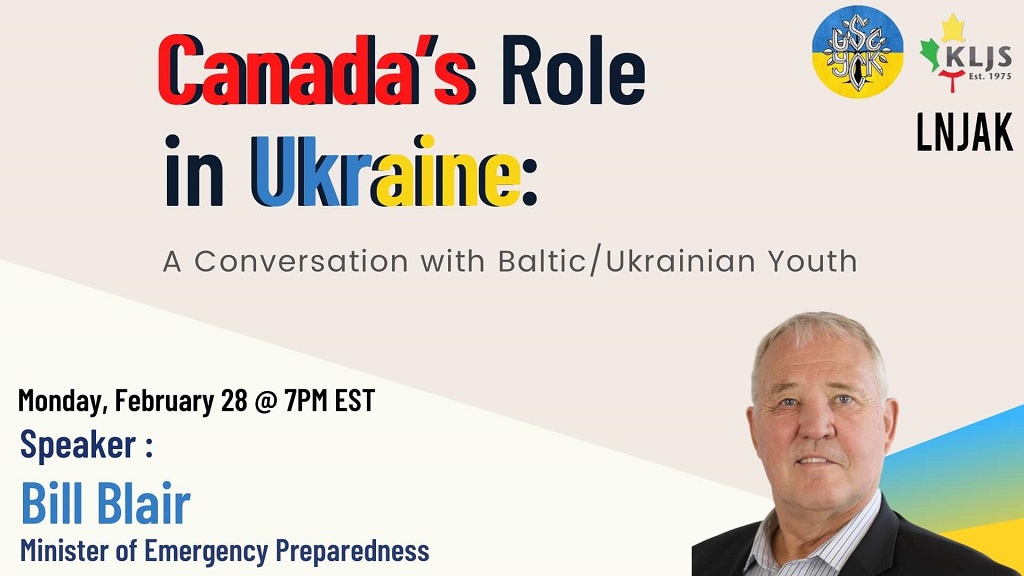 At the outset of the Russian threat against Ukraine, Canada’s Prime Minister Justin Trudeau formed two groups within the cabinet to monitor the situation and respond appropriately. One is incident response group which virtually meet daily to talk about military, financial, diplomatic issues, issues of intelligence, support, humanitarian aid, immigration and refugees. The other group deals exclusively with issues arising from Ukraine and is chaired by Minister of Public Safety and Emergency Preparedness of Canada Bill Blair.

“We have been working very hard to ensure that we provide appropriate supports to Ukraine, and those supports have taken the form of financial assistance,” said The Honorable Bill Blair during an online meeting with Ukrainian and Baltic students of North America. “We all witness and acknowledge the terrible tragedy that is taking place in Ukraine and an incredibly courageous response from their citizens.”

Last week, Ukrainian and Baltic youth met online to understand Canada’s role in protecting Ukraine and to create the space for youth across Canada to engage directly with their government officials.

During the talk, Minister Blair echoed the words of Deputy Prime Minister Chrystia Freeland, who said that “there’s nothing off the table”.

However, he said that, as of February 28, implementing a no-fly zone over Ukraine is “off the table”.

“No-fly zone would necessitate NATO forces providing air cover to the country to prevent some of the military action that’s taking place in Ukraine,” Blair said. “As tragic as these events in Ukraine are, we’re also trying to avoid this escalating into a global conflict.”

When asked about cutting off Russian supply of oil, Blair said that it is going to have a huge impact on Canada’s European allies, rather than a direct impact on Canada.

“It could result in significant inflationary pressures, we’ll also see interruptions on supply chain,” he said. “Within our own country, looking at how we mitigate the impact, the sanctions are necessary. They’re the right thing to do. But they do have a cost.”

Asked whether Canada is considering a possible ban on Russian students and children of oligarchs studying in Canadian universities, Blair said “these are some of the measures that are being very actively discussed.”

“One of the things that we were a little challenged on is there are many innocent people even in Russia, who are trying to get out of that country, and we don’t want to necessarily isolate them” he said. “At the same time, we are prepared to take whatever measures will be effective in convincing Mr. Putin that his actions are unacceptable to the world.” He said that Canada is looking at how to separate those individuals from their “toys”, “because that’s one way to hurt them and make them pariahs in civilized society.”

The Ukrainian Canadian Students Union has been working tirelessly and endlessly in speaking with the Canadian government and raising awareness on the issue. Representatives from the Union met with Prime Minister Justin Trudeau on Wednesday, February 23, one hour before the bombings began in Kyiv.

During the meeting last week, the students said they recognize the many ways their cultural histories are linked and understand the need for solidarity amongst nations to stand up against violence and to fight for independence. Jānis Lūsis said that the Baltic youth is committed to doing everything that we possibly can to stand with Ukrainians every day.

“Our countries have also experienced Russian aggression at the hands of Russia,” Lūsis said. “And I think we all ask ourselves, if that were to happen to the Baltic countries today, who would stand with us? And that’s why we are standing with Ukraine, because we know what it’s like right now.”

The president of the Canadian Ukrainian Students Union Danya Pankiw said that despite Russia challenging Ukraine’s freedom and democracy for centuries, Ukrainians always showed strength and Ukraine has always prevailed.

“In July of 2021, Putin wrote an essay that was titled ‘On the historical unity of Russians and Ukrainians’, and that really showed the world that he, in his mind, believes that Ukrainians and Russians are the same people,” Pankiw said. “And this has shown us a reason why he has invaded Ukraine in these last five days and started bombing our nation.”

Baltic members of the meeting took the opportunity to express their support to the Ukrainian students. Andres Kasekamp, a professor of Baltic Studies at the University of Toronto, called Ukrainian people “an inspiration to all of us”.

“We’re proud that the Canadian government is now really stepping up and being a leader amongst nations in the world in supporting the cause of democracy and trying to rein in the aggression from Russia,” he said. 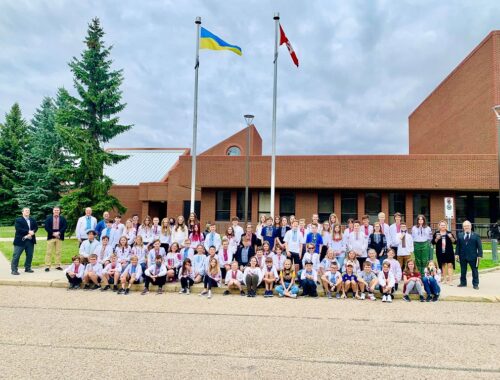 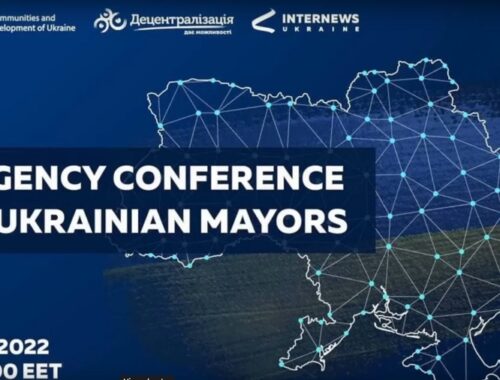 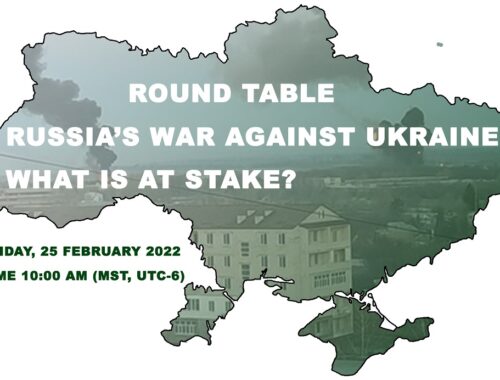